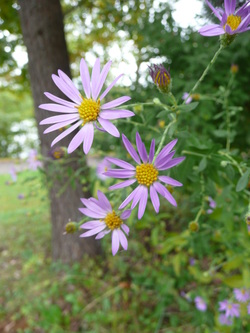 Aster
Prior to the first humans entering the North American continent either by the Bering Land Bridge or possibly by boats from the Atlantic Ocean, large mammals like American bison forged paths through the eastern forest to feeding grounds and other desired places like salt licks. These paths were further refined by the earliest human settlers, the ancestors to the many Native American Tribes who were in existence when Europeans discovered the Americas.

The Great Warpath was a major route connecting southern tribes like the Cherokee with those to the north like the Iroquois Nation. The Warpath was a key route for trade and for war. The Warpath became a principle route for frontiersman, including those first few to walk through the Cumberland Gap along a well-worn out route. The United States narrative is consistent in that frontiersman are followed by pioneers.

As the Europeans expanded, pushing the Tribes westward or to extinction, the warpath became a major stagecoach route. Stagecoach routes became railways and roads for automobiles. Even now historical markers near Rogersville and Kingsport, reminisce on the Great Warpath which lays beneath US-11W.

Warriors' Path State Park is named in commemoration of the Great Warpath. The Park is 950 acres and built along Patrick Henry Reservoir. The park has a 134 camp sites and hosts a variety of different activities, including golfing, mountain biking, hiking, and fishing.